They have turned into the new Cleveland Browns of today’s NFL. New York lost to The Washington Football Team (1-1) 30-29 on a Dustin Hopkins 43-yard field goal as time expired.

Hopkins missed a field goal from five yards further. He received a second chance because of Dexter Lawrence being offsides.

John Mara over the past five years with the New York Giants is 18-48. They have started 0-2 for the last eight of nine seasons. No one else has done it more than four times over that span. Ever since they won the 2011 Super Bowl against the New England Patriots, they have made the playoffs only once and haven’t won a playoff game in over a decade.

Ever since Tom Coughlin was let go in 2015, they have gone through three different head coaches in Ben McAdoo, Pat Shurmur, and Joe Judge. Judge appears to be another Bill Belichick disciple, who is way over his head. Joe Judge is making players run laps in practice just like high school football. If they don’t beat the Atlanta Falcons (0-2) on Eli Manning day next Sunday, September 26th, Joe Judge is going to lose the locker room in a hurry.

I wouldn’t be surprised to see a fourth coach for this organization since 2015 when the 2022 regular season rolls around. The New York Giants season is over and we aren’t on the second Sunday of the 2021 NFL season yet. The amount of head coaches they are going to be rolling out is what the Cleveland Browns used to do. This is before they found Kevin Stefanski.

Jerry Reese was finally let go as the New York Giants general manager in 2017. Dave Gettleman has to go and I wouldn’t be surprised to see him fired midseason. They need a new voice in the front office not named Kevin Abrams. New York Giants (0-2) fans are used to losing and disappointment at this point. John Mara has seen his better days. He is living in the past and is out of touch with today’s NFL.

Joe Burrow is already in the Hall of Fame?

Fri Sep 17 , 2021
Ok, ok…I admit that was a hook title. However, it is notable that the Bengals debuted a redesigned jersey for the first time in the regular season. Burrow not only made an unbelievably quick comeback from a gruesome injury, but the Bengals won a wild OT game over Minnesota to […] 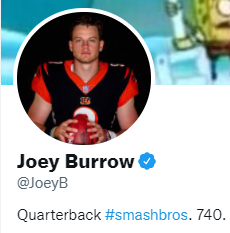