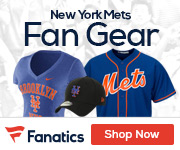 New York Mets Out of Gas; Potential Changes in 2020

The New York Mets are potentially in a lot of trouble for the 2019 postseason after getting swept not only to the Atlanta Braves at home but also the Chicago Cubs at home. The series between Chicago and New York taught us a few things.

The first thing it taught us was that the Cubs are miles and miles ahead of the Mets in talent and managing. Javier Baez and Kris Bryant were very good. They didn't even have Wilson Contreras and Anthony Rizzo in this series due to injury and they had no problem.

New York had their top players healthy in Pete Alonso, Amed Rosario, J.D. Davis, Michael Conforto, Wilson Ramos, and Jeff McNeil. They weren't able to hit with runners in scoring position, but the biggest issue in this series was the starting pitching once again faltered.

Everyone hypes up this rotation and I understand pitching is important, but offense beats defense any day of the week. Noah Syndergaard completely folded in Wednesday's start and gave up 10 runs in three innings. Jacob deGrom gave up all four of his runs to a backup in infielder in Victor Caratini on Thursday night.

Even though General Manager Brodie Van Wagenen has swung for the fences with his trades and failed, it seems as if recently New York has a better roster now than it was before the trade deadline. I thought Van Wagenen was going to be gone after one season, but he is probably going to be around in 2021. He also had a very good draft this season and hopefully for his sake, Brodie Van Wagenen doesn't trade his top prospects.

Mickey Callaway has made several bad decisions this season and because of it, it has resulted in many losses. They need a manager who knows what is going on and understands the game.

A few potential names that I think they could hire next season as general manager is: Alex Rodriguez (currently does ESPN Sunday Night broadcast on ESPN, was considered for the New York Yankees managerial job in 2017), David Wright (recently retired for the New York Mets and is currently in the front office), Keith Hernandez (Played first base for the Mets and won the 1986 World Series title; current broadcaster for SNY), Joe Girardi (Currently an analyst on MLB Network; Familiar with the New York market and won 2009 World Series with the New York Yankees), Dusty Baker (Managed for the San Francisco Giants, Chicago Cubs, Cincinnati Reds, and the Washington Nationals; makes the playoffs more than he misses), Joe Espada (Current bench coach for the Houston Astros), Bob Geren (Current bench coach for the Los Angeles Dodgers), or Al Pedrique (Current first base coach for the Oakland Athletics; Managed in the New York Yankees farm system and was highly considered for the managerial job in 2017 in New York with the Yankees).

It would be interesting to see if they would go with one of those people I just mentioned and hopefully they wouldn't be a puppet to the Wilpon's. When Terry Collins was managing with the Mets from 2011-2017, it didn't seem as if he was a puppet and Collins stood up for himself.

New York should move on from third baseman Todd Frazier, outfielder Juan Lagares, and starting pitcher Zack Wheeler in the offseason. Frazier and Wheeler are both going to be free agents and the Mets might be able to get a compensation pick or two back for them.

Lagares isn't even a major league caliber player anymore. If everyone is healthy, the top four outfielders next season will be J.D. Davis, Yoenis Cespedes, Michael Conforto, and Brandon Nimmo.

Jeff McNeil will be at third base, Amed Rosario will be at shortstop, and Pete Alonso will be at first base. Jed Lowrie, Joe Panik, and Robinson Cano will compete for the second base job next season. Wilson Ramos will be the starting catcher in 2020. Even though Panik will be a free agent, I think New York would bring him back.

It will be interesting to see what they do with Cano. He isn't capable of playing 162 games anymore. Robinson Cano is injury prone and what's worse is he has four more years left on his contract.

This team also needs to sign another starting pitcher in the offseason if Wheeler walks. The bullpen has been a lot better, but they need to add another reliever or two. It is also unclear if Edwin Diaz or Seth Lugo will be the closer in 2020. Jeurys Familia has also been inconsistent and so has Robert Gsellman.

Even though there is still a month of baseball left, the New York Mets are five games back of the Chicago Cubs for the second wild card spot in the National League. New York will play the next nine games against the Philadelphia Phillies (three on the road this weekend and three at home next weekend) and the Washington Nationals on the road (9/3-9/5).

New York might be out of gas at this point. They might have put to much energy into their one month magical run to get back into the playoff hunt, but this franchise needs to realize they have some holes to fix this offseason. The Mets have the potential to be a playoff team next season and they showed signs of it during that stretch run.

I think if this team decided to get rid of Callaway in the offseason and hire the right manager, I think they would be heading in the right direction. This team will most likely miss the playoffs for the third straight season.

Sun Sep 1 , 2019
The New York Mets are potentially in a lot of trouble for the 2019 postseason after getting swept not only to the Atlanta Braves at home but also the Chicago Cubs at home. The series between Chicago and New York taught us a few things. The first thing it taught […]