What we got right last week:

What we got wrong last week:

Take West Virginia and the money line at -145

A brutal week for sure, as I am sure only UTSA fans picked them over Illinois, and Penn State kind of shocked everyone.

Make sure to click the banner at top of the article to get a huge deposit bonus from our sponsor, BetUs ! 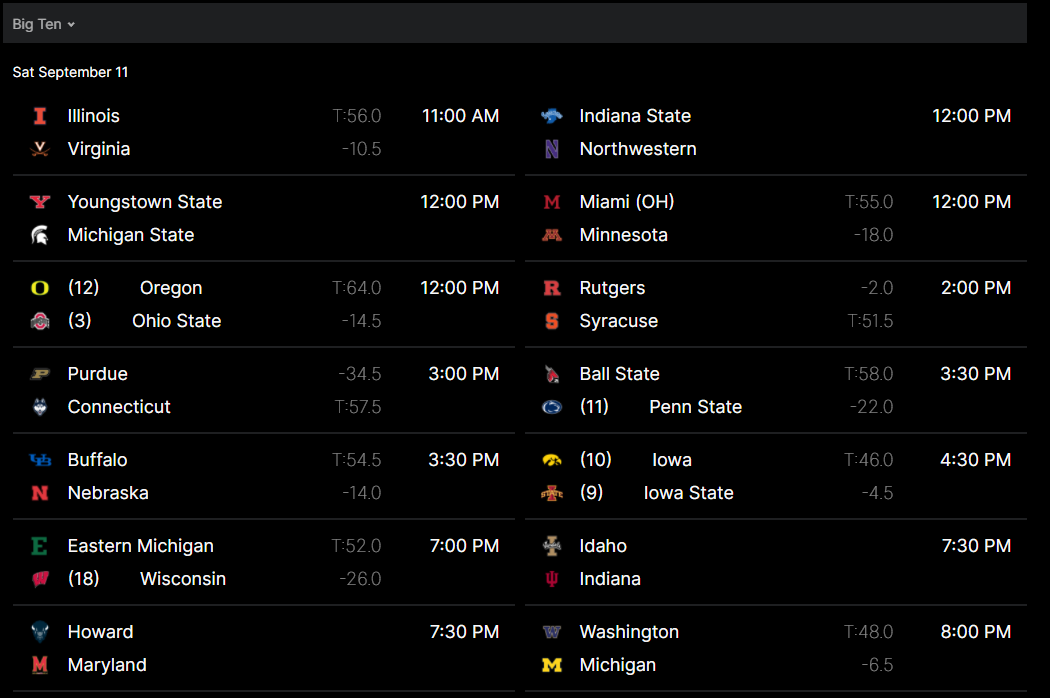 Illinois plus the points option may have looked juicy a week ago before they laid a turd against a lower-tier team. Here are my locks of the week in the Big Ten.

Worth Your Money Bets:

Ohio State: Does anyone stop anyone in college football? Even the most uneven of matchups produce tons of points, and Ohio State dropped 45 on a little bit better overall defense and breaking in a Freshman quarterback. Plus, Oregon could catch their stride against a suspect Ohio State defense. I see a similar score to last week's Ohio State game.

Rutgers: The Scarlet Knights were ravenous last week, dropping 61 on the head of Temple, while Syracuse gained a 20 point pedestrian win over Ohio U, I see Rutgers taking this by 10-14 points with good ole fashioned Big Ten football, pound the run, play solid defense.

Purdue:  The Boilers produced 30 points against a much better Oregon State defense than what they will face today. Plus, UConn's coach just quit after 1 week and they were already horrible. Look for Purdue to cover much of the 57 on their own, and maybe you have to sweat out a UConn garbage TD late to cover.

Penn State: Ball State beat a lower-tier team by 10 while Penn State completely shut down Wisconsin. Not enough? Fine. Just look at Penn State's defense, their MAC opponent may have trouble getting past midfield, Penn State should cover half the spread just in field position.

Iowa: This may actually be the Game of the Week, no offense Ohio State and Oregon. Iowa's defense looks scary good, and while Iowa State barely beat a lower-tier team, it is an elite one at least. It'll come down to Iowa's running defense versus Iowa State's stellar rushing attack, but 9 out of 10 times I'm betting on that matchup in favor of the Hawkeyes.