The Cleveland Browns game against the Las Vegas Raiders was pushed back from Saturday afternoon to Monday evening. Cleveland was without quarterbacks Baker Mayfield and Case Keenum, along with other players and head coach Kevin Stefanski.

Nick Mullens made the start for the Browns. He was good, but it wasn’t good enough as Daniel Carlson drilled the game-winning 48-yard field goal as time expired for the Las Vegas Raiders in a 16-14 win over the Cleveland Browns on the road at FirstEnergy Stadium in Cleveland, Ohio.

The Raiders won that game because they forced the Cleveland Browns offense to go three-and-out after Derek Carr was picked off by Grant Williams with less than 2:59 remaining in regulation.

Before that turnover, Cleveland had the go-ahead touchdown on a fourth-down play on a Nick Mullens 6-yard touchdown pass to Harrison Bryant with less than 3:54 remaining in regulation.

Mullens completed 20-of-30 passes for 147 yards and one touchdown.

Nick Chubb was the Cleveland Browns leading rusher with 91 yards on 23 carries and a touchdown. He also scored on a 4-yard rushing touchdown in the third quarter for the Browns.

Bryant caught two passes for 11 yards receiving and a touchdown for the Browns. He needs to see the field more often for Cleveland moving forward because he is a very talented tight end.

Chase McLaughin missed a 47-yard field goal at the end of the first half for the Cleveland Browns. That probably cost Cleveland this football game, but they had no excuse to lose this football game anyways despite the COVID-19 issues this football team was dealing with. McLaughlin has missed his six out of 11 field goals. They should cut him or something.

Speaking of talent, there is a lot of talent on this football team. The Cleveland Browns would have been the 4th seed in the AFC if they won. Because they lost, Cleveland is currently the 12th seed in the AFC right now and it is absolutely inexcusable with a team that had Super Bowl aspirations heading into this season and it is the same old Cleveland Browns and it has taken a toll on this fanbase mentally and physically.

Derek Carr completed 25-of-38 passes for 236 yards, one touchdown, and one interception. This was the first game this season that the Las Vegas Raiders have won with Derek Carr not throwing for over 300 yards passing. He also rushed for seven yards on three carries.

Josh Jacobs was the Raiders leading rusher with 52 yards on 15 carries. He also caught three passes for 42 yards receiving.

On the Las Vegas Raiders opening drive of the football game, Derek Carr threw a 5-yard touchdown pass to Bryan Edwards. He only finished with three receptions for eight yards receiving and a score.

Las Vegas keeps their playoff hopes alive. Had they lost, it would have been a disaster.

The Cleveland Browns feel like their playoff hopes are on life support. They will have no layup games and will have to earn the AFC North divisional title if they win it badly enough. Cleveland is always in the same spot every single year. The more things change, the more things stay the same.

Current AFC North Standings: 1. Cincinnati Bengals (8-6), 2. Baltimore Ravens (8-6), 3. Pittsburgh Steelers (7-6-1), and 4. Cleveland Browns (7-7). It appears as if only one team from the AFC North is going to find a way into the AFC and NFL Playoffs and will most likely be the fourth seed.

The Las Vegas Raiders (7-7) next football game will be at home against the Denver Broncos (7-7) this Sunday.

The Cleveland Browns (7-7) next football game will be on the road against the Green Bay Packers (11-3) this Saturday afternoon on Christmas Day.

Philadelphia Eagles Inching Closer to the Seventh Seed in the NFC

Wed Dec 22 , 2021
The Philadelphia Eagles looked flat early against The Washington Football Team in the first quarter and trailed 10-0. Boos were raining at Lincoln Financial Field in Philadelphia, Pennsylvania, but the Eagles turned those boos into cheers and easily took down Washington by a final score of 27-17. Jalen Hurts was […] 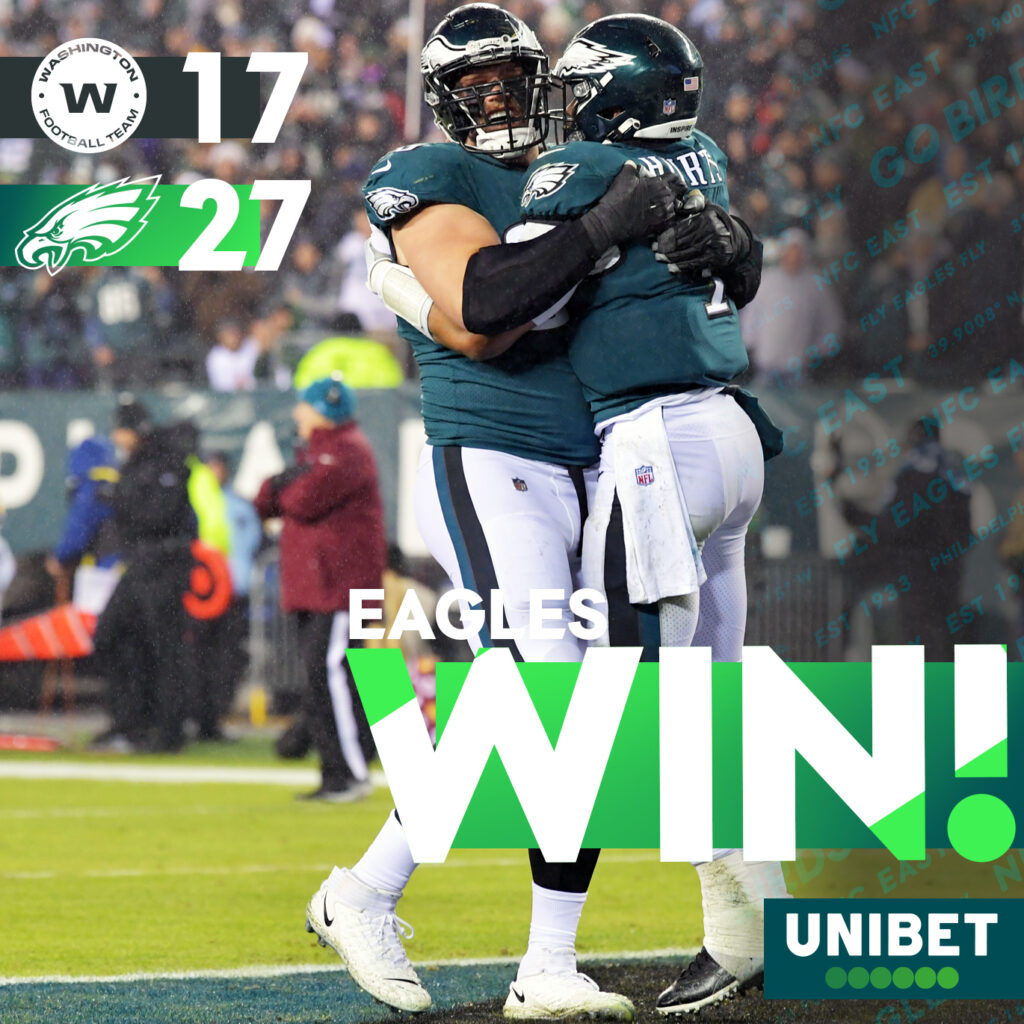